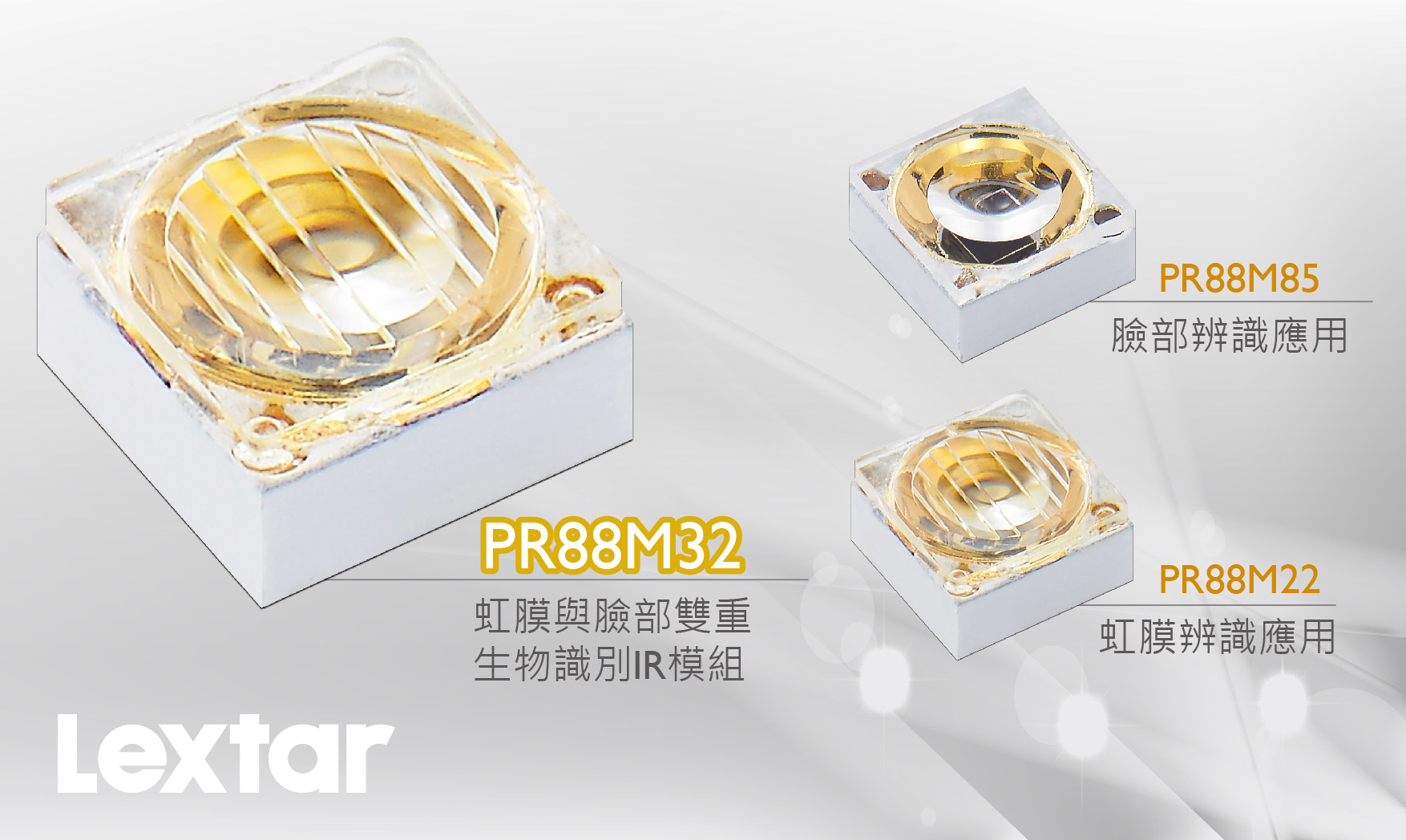 Lextar Electronics Corp (“Lextar” or the “Company”) (TAIEX: 3698) released the PR88 IR LED packaging module that is used for iris and facial biometric functions, making it one of a few IR LED modules in the industry with double biometric functions. In addition, it also simultaneously released two IR LED modules with different beam angles that can be widely applied on security systems, access control systems, mobile phones, notebook PCs and other. By releasing various IR LED products at the same time, Lextar Electronics is formally entering the market of smart senor applications.

In recent years, handheld devices were gradually equipped with identification recognition systems to achieve more convenient unlocking and mobile payment functions, while simultaneously taking care of the product’s lightness, slimness and user safety. This caused the rise of biometric sensor components. Lextar’s newly released iris and facial double biometric IR LED is capable of achieving double identification recognition functions with just one module, thus strengthening user security. In addition to its 1.4mm ultra-slim design, it further saves the design space for terminal applications. Moreover, Lextar also released two IR packages with different beam angles: the one with a smaller beam angle can be used for iris recognition, while the other one with a larger beam angle can be used for facial recognition. Its product series have all passed the IEC 62471 highest level of human eye security exemption tests, while its algorithm and software were verified by various well-known brands. These product series of Lextar have already been introduced on mobile phones and access control systems, and can be applied on the sensorial devices of sensing equipment, robots, notebook PCs and other applications in the future.

Also, given that wearable devices with health and sport functions have become trendy with the development of IoT and smart medical service, Lextar IR LED products have also entered the field of health and wearable medical applications. Lextar has already developed a reflective green light heartbeat sensor LED module and continues to develop the three-in-one module of heart rhythm, blood oxygen and blood pressure, which can be applied on bio-sensors.

Lextar Electronics stated that since the establishment of the company’s new business unit, it has developed many advanced technologies and proposed various solution projects regarding the fields of consumer electronics, automotive application, industrial automation, medical and health, and others. These technologies have been successively commercialized in 2017 and obtained the appreciation of our customers. Lextar also simultaneously cooperates closely with its customers in developing customized products, improving its added value, and deepening its cooperation with customers with its technology and designing capability.