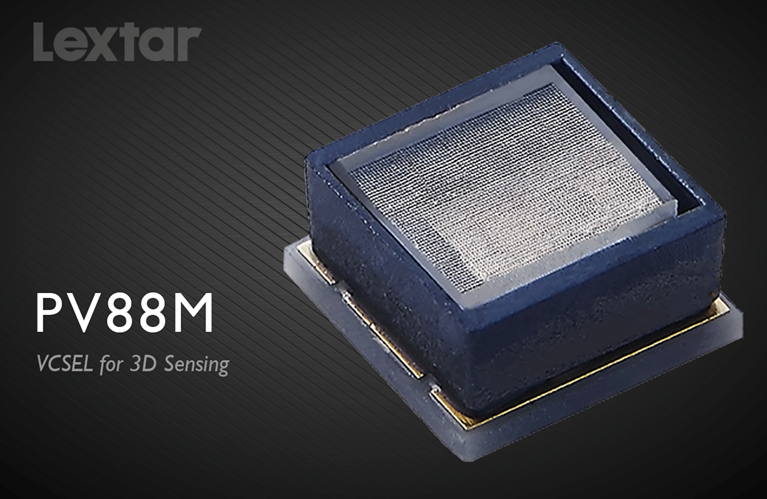 Lextar Electronics, the vertically integrated LED company is to announce its I-Mini Square module for automotive tail lamp application. The company applied its newest mini LED technology on automotive tail lamps which can display dynamic image smoothly. No longer after Lextar announced its Mini LED display technology in August, it has again made an innovative breakthrough in Mini LED applications. This concept application will make its debut at the biannual Electronica 2018 held in Munich from 13 to 16 Nov.

Lextar is to launch a VSCEL product portfolio, which can be used for 3D depth-sensing applications including gesture recognition, people detection, facial recognition, and driver fatigue detection. Lextar will show its VSCEL products in Electronica 2018 held once every two years in Munich, Germany starting from November 13, and this is the first official launch of a product portfolio for 3D sensing package and application.

Lextar’s VCSEL PV88M component series is mainly applied to the light source emission of the 3D depth-sensing module, providing products with various wave lengths, brightnesses, and package sizes, and beam angle selection from 45 to 100 degrees. This series can be applied to many kinds of sensing systems based on customer demand. In Electronica 2018, Lextar will present VCSEL products integrating camera modules and software to provide interactive experiences for visitors. As for gesture recognition, users can gesture to control the vehicle control system, such as adjusting audio volume, selection from the menu, and answering/hanging up phone calls. In terms of facial recognition, this series, capable of reading faces and telling humans from photos, is usually applied to security systems. For human detection applications, it can recognize humans and detect human height, and is perfect for senior/children monitoring, senior fall detection, or people counting in the mall. In addition, in driver fatigue detection applications, products can detect reactions of fatigue, including closed eyes and nodding, to enhance driving safety.